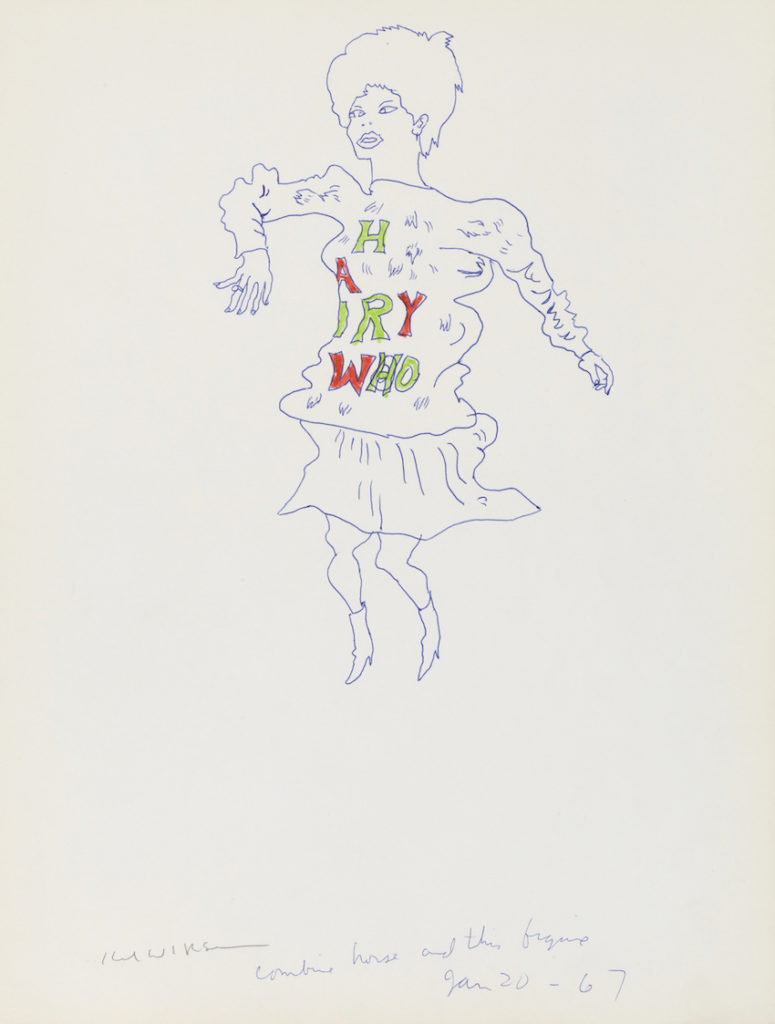 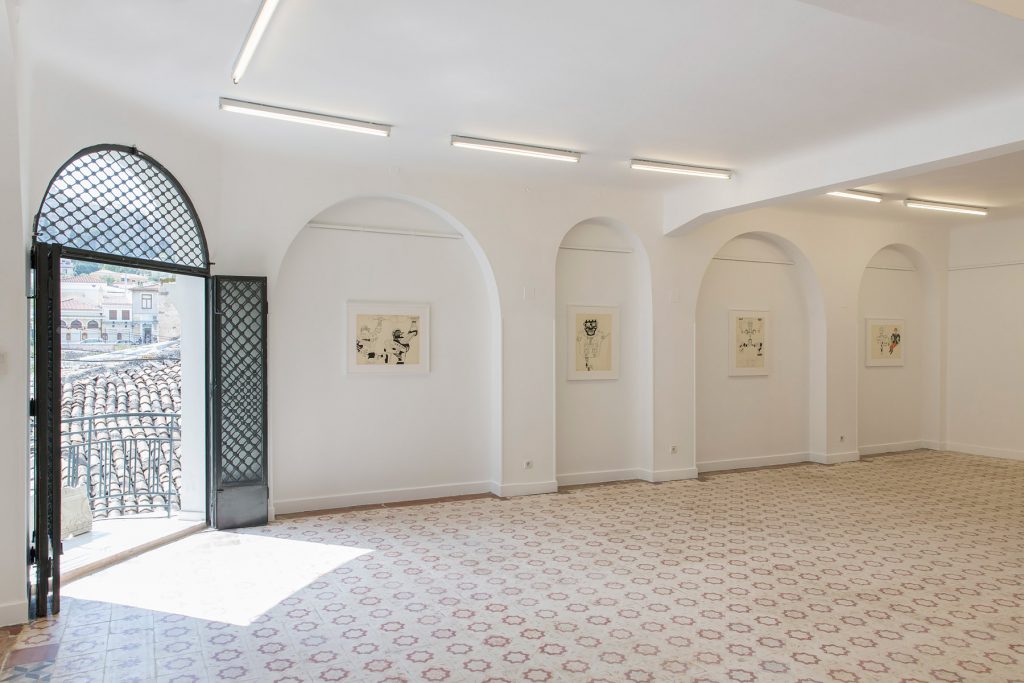 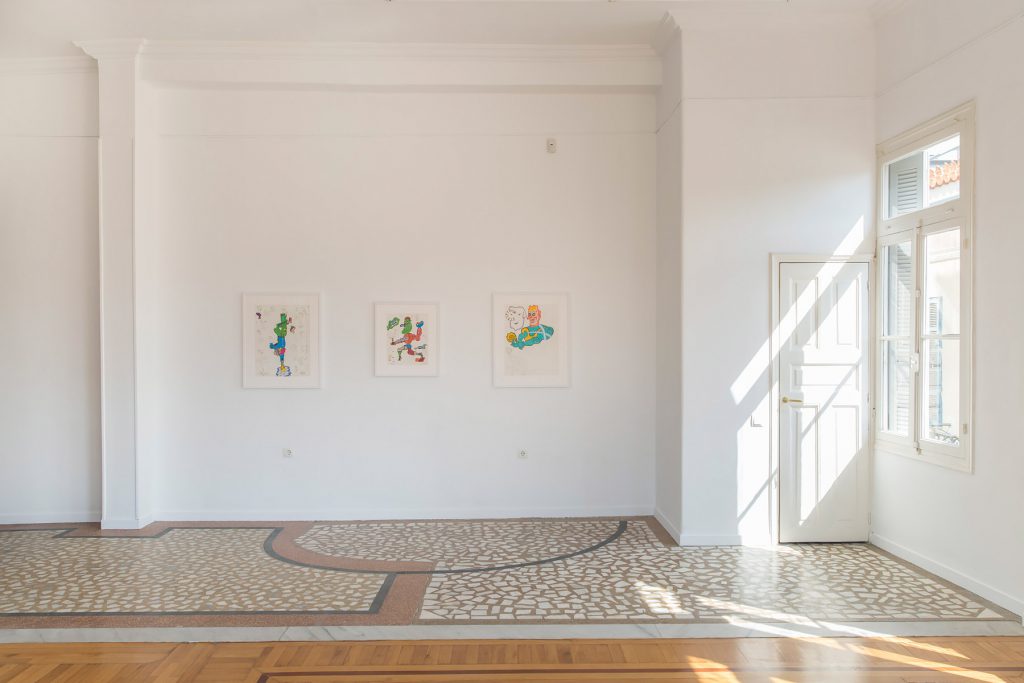 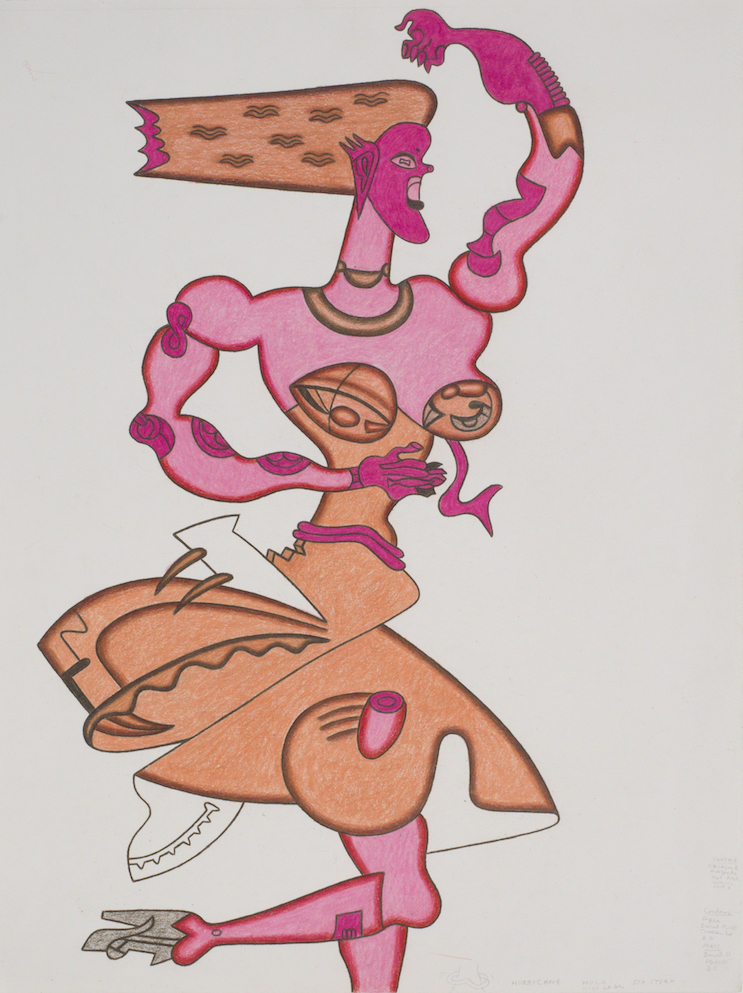 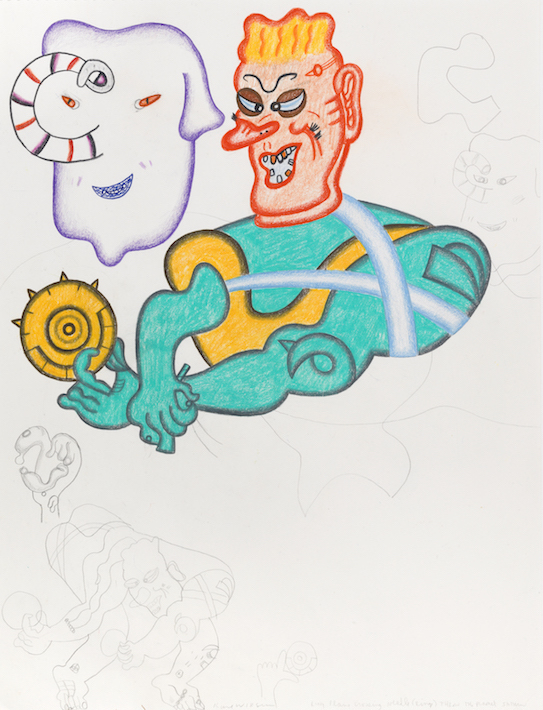 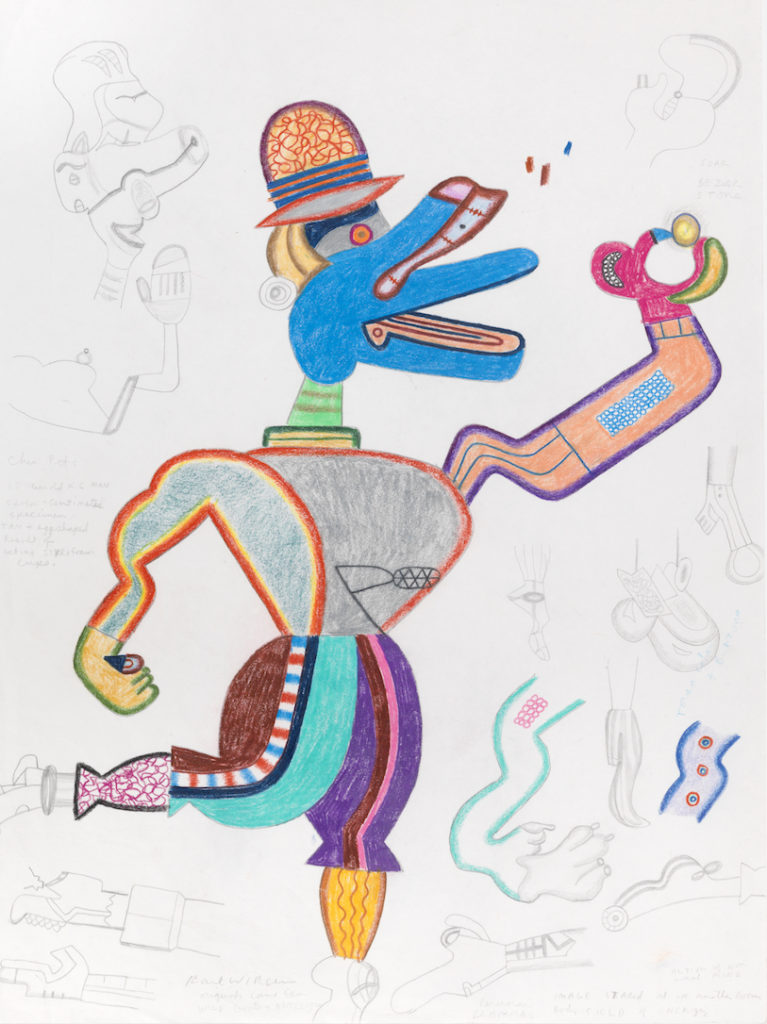 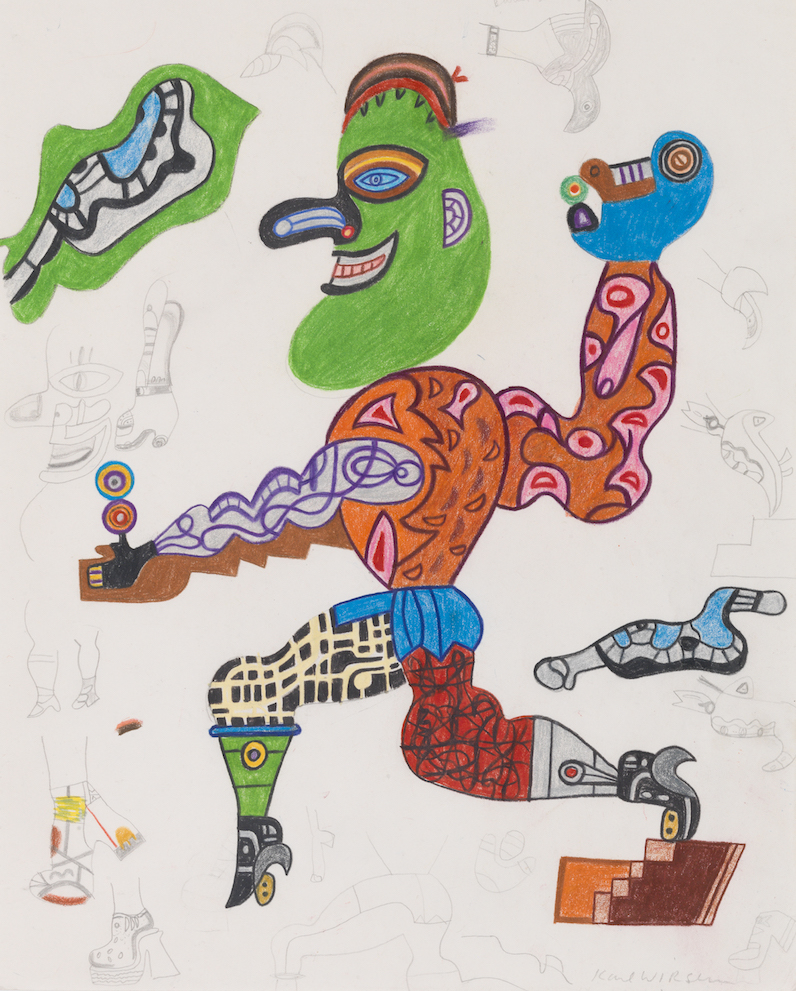 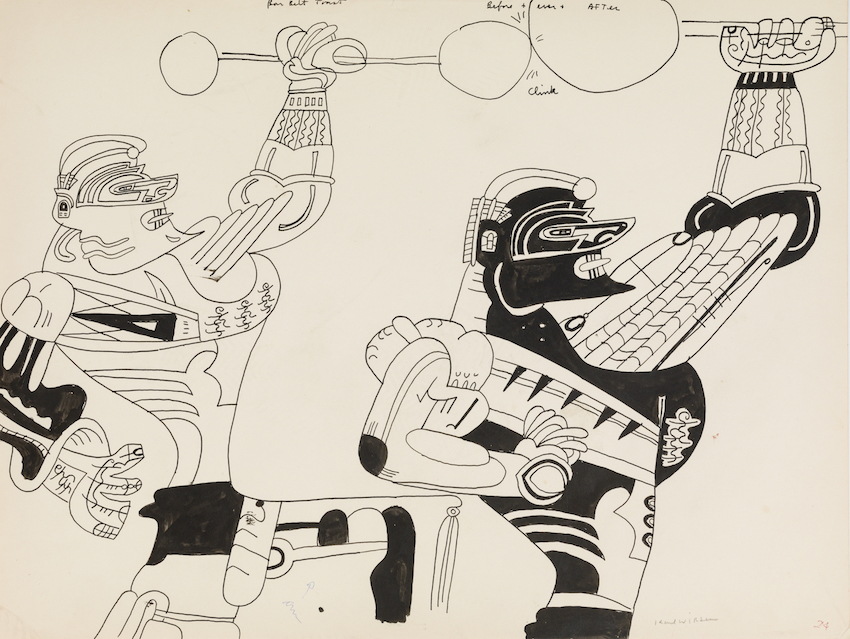 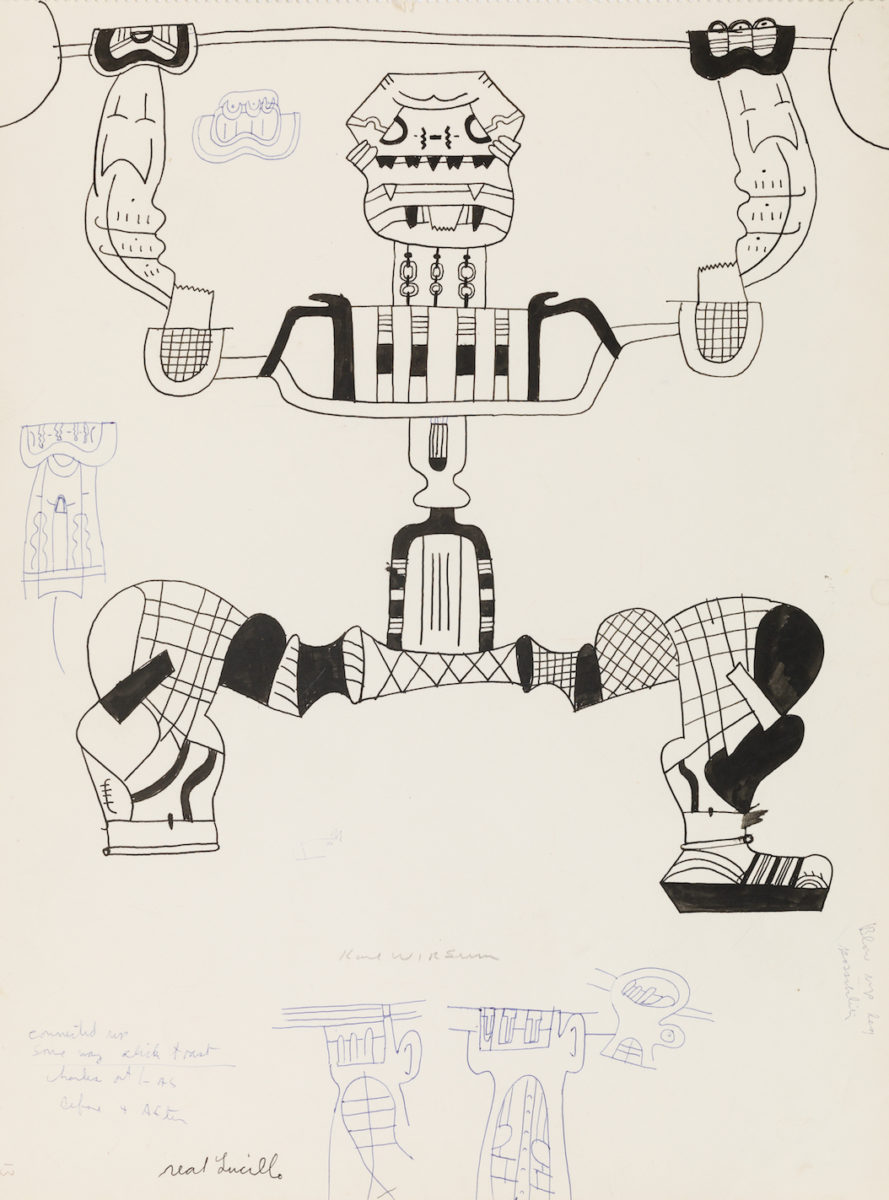 Andreas Melas is pleased to present an exhibition of over fifty years of drawings by Karl Wirsum. Drawing has been at the center of Wirsum’s artistic practice for his entire artistic life. Tracking just a single theme — movement — across twenty drawings reveals the ways in which Wirsum’s visual language has been a site for free association, invention, play, and refinement. Working in multiple sketchbooks at once, Wirsum developed ideas as discreet drawings — amassing dozens of versions of a pictorial idea.
For Wirsum, “Drawing is an end in itself in terms of connecting to my creative energy. Painting and such carry the images to further elaboration and refinement which I find satisfying in terms of a certain obsession or compulsion to really get things right. The drawings are more raw and basic… I always see drawing as potential… Even though I complete drawings there’s still that potential out there to bring them to another realm.”

These creative experiments have frequently involved putting a figure through its physical paces — seeing it jump, dance, run, and wildly pose. It is a way for Wirsum to animate his idea and test his ability to create a believable imagined space for himself. Moreover, Wirsum has drawn in motion for years — he would walk between teetering stacks of sketchbooks, often times seemingly acrobatic in his drawing and personal archiving.

Wirsum’s way of delineating forms has changed over the years, but his basic line is instantly recognizable — part sign painter, part Miro, part Dick Tracy, part Nazca pottery. He has a genius for the invention and delineating of a figure’s inner workings, which are derived from everything from Radio waves, geologic patterns, insects, and space exploration. All these parts are made whole by his contour line, which contains and informs the interior volumes.

For Wirsum, the 1960s were his formative artistic years. He graduated from the Art Institute of Chicago in 1961, and began exhibiting shortly thereafter. With Jim Nutt, Gladys Nilsson, Suellen Rocca, Art Green, and Jim Falconer, Wirsum was a member of the Hairy Who, a self-named group of artists who mounted six exhibitions between 1966 and 1969, and have been influential in the decades since. In those years, there are images abstracted from photographs, others that focus on his obsession with kites, one that imagines a Hairy Who mascot, and still more that explore the sheen on hair and metallics. And then, in the 1970s, after the Hairy Who exhibitions and just as he moved to Sacramento for a short while, his visual language changed, too, leaving behind curvilinear forms and high-key color and initiating a hard-edged geometric language with fewer colors and a focus on the possibilities of working with the entire human form, especially puppet-like figures (eventually resulting in series of handcrafted painted wood marionettes which he envisioned as performers in his own theatrical company) with jack-o-lantern-like faces and monstrous, a pared down mode that allowed Wirsum to explicitly explore high contrast forms related to his love of both black and white daily comic strips and continued engagement with Mesoamerican patterning.

In the 1980s, Wirsum changed again. He became fascinated with the extremes to which human bodies could be pushed — from athletic training to genetic modifications. Ultimately he moved into rendering figures that are not human by any known standard, but rather uncanny beings that do not look or behave as any recognizable phenomena might. The ensuing decades found Wirsum advancing this approach and pushing his figures into ever more active scenarios. These drawings include his most detailed written and drawn notes, essentially map the visual and verbal territory of Wirsum’s brain. A single sheet might include several alternate versions of a hand dotted around a figure, for example, in addition to Wirsum’s prose texts that include names, references, and ground rules for what a being can and cannot do. In these works his figures contort and cavort, are imagined in all manner of predicaments to the delight of Karl Wirsum, our benevolent and mysterious narrator.

Karl Wirsum (b. 1939) lives and works in Chicago. His work will be included in the upcoming exhibition, “Hairy Who?” at the Art Institute of Chicago. His work was recently featured Painting Forever III at Greene Nafatli and Matthew Marks Gallery; Famous Artists from Chicago, 1965-1975, at Fondazione Prada, Milan, Italy; America Is Hard to See at the Whitney Museum of American Art, New York; What Nerve! at Matthew Marks Gallery and the RISD Museum of Art; Sinister Pop at the Whitney Museum of American Art, New York; Chicago Imagists at Madison Museum of Contemporary Art, Madison; Made in Chicago: The Koffler Collection at the Smithsonian American Art Museum, Washington, D.C.; Chicago Imagists: 1966-1973 at Thomas Dane Gallery, London; and Seeing is a Kind of Thinking: A Jim Nutt Companion at Museum of Contemporary Art, Chicago.